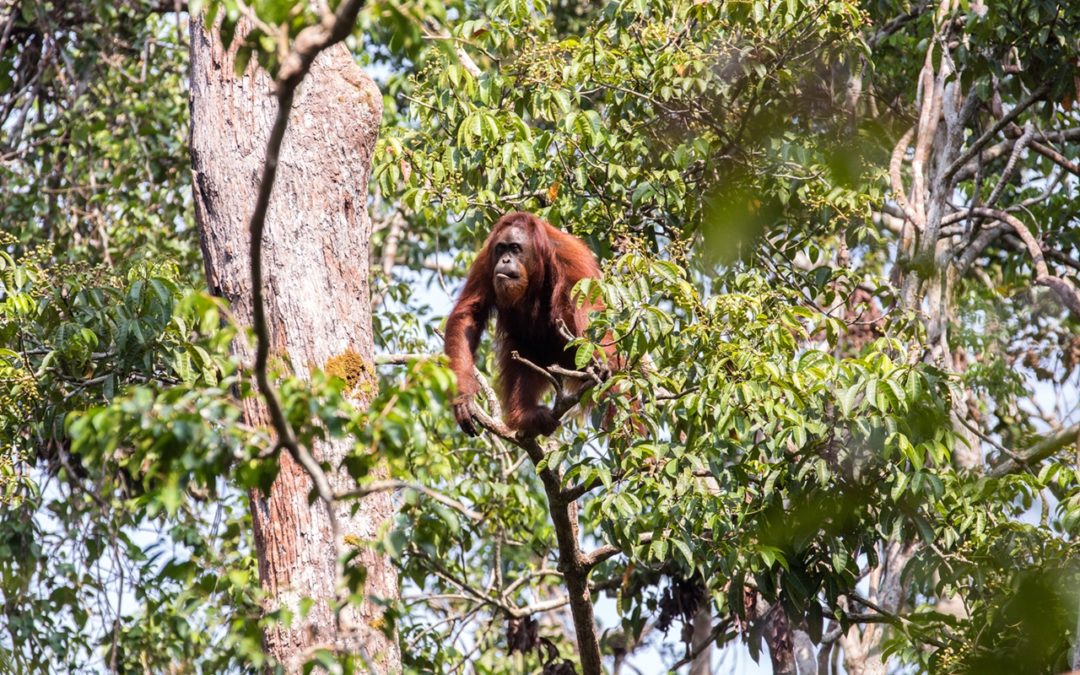 As it would take us an hour to reach the nesting site we left at 04-30hours under the shadow of darkness. We had been following the wild orang-utan the previous day so we knew the exact location of the night nesting site which are always built approximately 10 metres up.

At 05-30hours the orang-utan left the nest and moved to the lower branches, spent a minute defecating and urinating and then moved onto another tree, using a hand over hand motion called brachiating. The orang-utan settled down and started to eat the fruits from the tree by using both hands and using its legs and feet to hold onto the branches. The orang-utan stayed eating the same fruit for about an hour then moved to the other tree species using the tree vines to move from branch to branch. As the orang-utan fed birds in the trees started making lots of noise which disturbed the orang-utan and he made a kissquick noise to show his disapproval.

The orang-utan moved off and we followed for about 1 ½ hours through different habitats of the rainforest, he stopped for a while looking at the trees, he started to make a nest by breaking some leafy branches and by smoothing them into position using a fourth hive tool motion.

The orang-utan rested and we also took the opportunity to rest and have our packed lunch but always still observing the orang-utan in the nest. After an hour the orang-utan came out of the nest and started to move from tree to tree, he stopped to eat fruits, young leaves and flowers. The orang-utan we were following was a sub-adult male and was very active because of the number of trees in flower and fruit. We continued to follow the orang-utan until it was getting dark he stopped at a tree and started to make a night nest by breaking the branches and smoothing them around him. Once we were sure that the orang-utan had settled down for the night we decided to leave and start our long journey back.

On our way back to base camp we heard the soothing sounds of the nocturnal species it was a very tiring day but was very satisfactory.