Tanjung Puting National Park is famous for its orangutan rehabilitation and conservation programs. The park is located in Indonesia on the island of Borneo in the Province of Central Kalimantan. A widely use jump off to the park is Kumai, a small port town in Central Kalimantan.

By Ship: Pelayaran Nasional Indonesia (PELNI) is the national shipping company of Indonesia. They operate various routes, and hae access to Kumai from Semarang and Surabaya directly. You will need their homepage for actual information, sometimes they are on biweekly schedule. 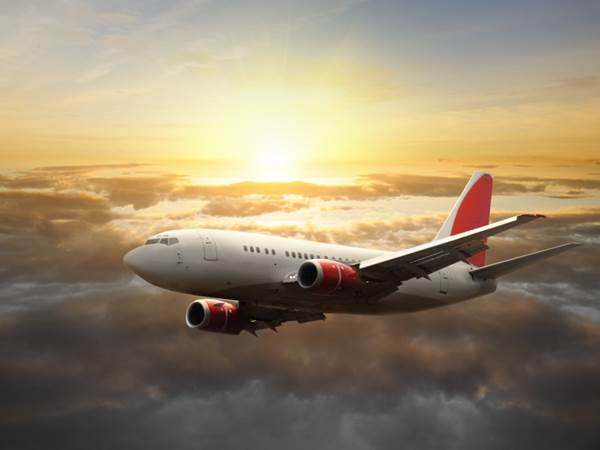 With an area of over 700.000 square kilometers, Borneo is the third largest island in the world, stretching from about  4° south of equator  to 7° north. Politically, Borneo is divide amongst three countries: Malaysia (the state of sabah and sarawak), Indonesia (the province of west,south,east and central Kalimantan) and Brunei.

Large tracts of Borneo, particularly the southern and eastern region, consist of hilly lowlands and swampy plains. The central and north western region are dominated by rugged mountain ranges with peak rising to between 1000 and 2000 m above sea level. Gunung Kinabalu,, at 4101 m, is the highest peak between the Himalayas and New Guinea. 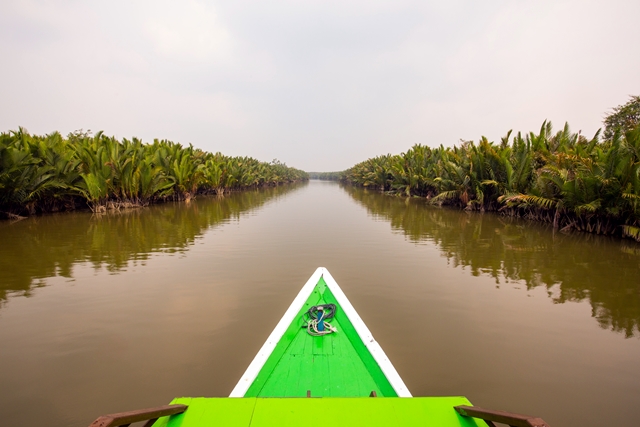 The natural  vegetation of most of Borneo consist of evergreen rainforest of various types. Soil characteristics seem to be very important in influence forest composition. The amount and pattern of rainfall varies from place to place, but most area receive between 200 to 400 cm per  year, with an average of at least 10 cm in most months. Mean temperature are roughly the same in all areas, for a given altitude, with a typical daily maximum of 30°C in the lowlands.

Much of the coast of Borneo is fringed by mangrove and nipah palm. In many areas further inland, extensive freshwater swamp occur. Peat swamp forest, where the soil consists largely of acidic organic material, are found in some area, especially between Sei . Kapuas in  West Kalimantan and the Sei. Tutong in Brunai. This forest supports few mammal.

Traditionally, most of Borneo’s native peoples have been shifting cultivators, both in coastal and lowland riverine and in the upland far from the coast. As a result , the vegetation in many part of the island consist of a patchwork of essentially undisturbed forest, low stature forest in various stages of regeneration, and clear areas. On many steep on and upland areas where agriculture has been tried, the thin topsoil is inadequate to support regrowth of forest, and there are now extensive tracts of coarse lalang grasss which are unprodutive and vitually useless for both wildlife and Man. In some areas, attempts are being made to make such land productive again by planting exotic trees tolerant of poor conditions. 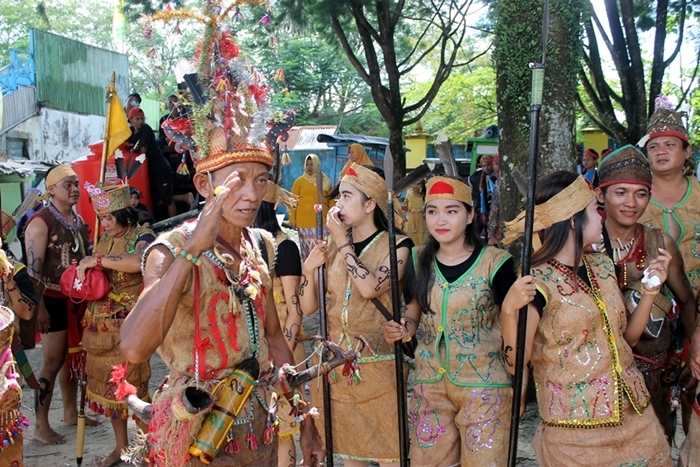 Source:A Field Guide to the Mammals of Borneo by J. Payne, C.M. Francis and K. Phillipps (1985) 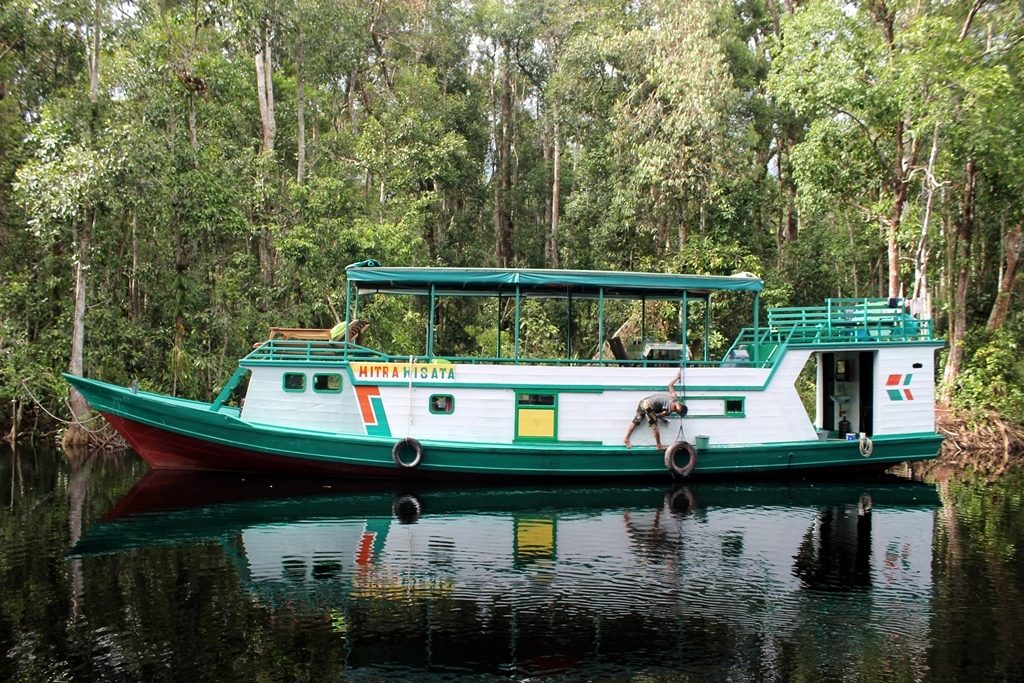 A wooden boat called Kelotok with roof upper deck, by Average speed of 10 km /hours is a river transportation of Indonesia, particularly in the island of a thousand river Kalimantan . The Kelotok has various size and type of motor and equipped by facilities such as Bathroom, Toilet, Kitchen, Chair, Dining table, Mattresses/spring bed, Mosquito net, Pillow, Blanket, Towel, Washtafel, Generator, Inverter, Life jacket, Lifebouy, First aid kit, Fire estinguisher and Electricity. In addition to the accomodation, Kelotok is being alternative choice for traveller to stay during the trip at Tanjung Puting national Park. Kelotok crew are very helpful and most of visitors prefer to stay and overnight on Klotok in order to enjoy the nature and experienced it.

Our Boat/Kelotok capacity maximum  is 6 Pax/Persons. Based on Stay and overnight on Boat and 25 Pax/Persons, Based on one day trip.

There are various Hotel  in Pangkalan Bun and Kumai and all of them are recommended by Tripadvisor and Lonely Planet. If you are interested to get more information about the Hotels kindly please to know them as below:

Orangutans have an enormous arm span. A male may stretch his arms some 7 feet (2 meters) from fingertip to fingertip – a reach considerably longer than his standing height of about 5 feet (1.5 meters). When orangutan do stand, their hands nearly touch the ground. 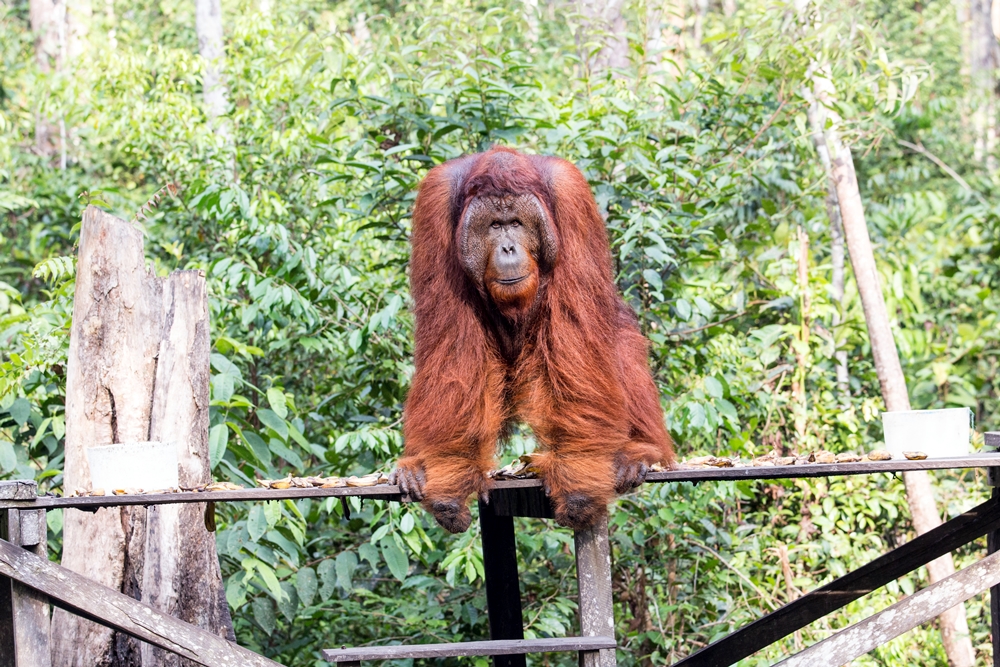 Orangutans’ arm are well suited to their lifestyle because their spend much of their time ( some 90 percent) in the trees of their tropical rain forest home. they even sleep alot in nests of leafy branches. They use large leaves as umbrellas and shelters to protect themselves from common rains.

These celeral primates forage for food during daylight hours. Most of their diet consists of fruit and leaves gathered from rain forest trees. They also eat bark, insect and, on rare occasion, meat.

Orangutans build new nest everyday as they are arboreal. They are more solitary than other apes. Adult males are loners but anytime will stay together with female just for copulate. As they move through the rainforest they make plenty of rumbling,howling calls to ensure that their stay out of each others way. The adult male “long call” can be heard 1.2 (2 kilometers) away.

Mothers and their young, how ever share a strong bond. Infants will stay with their mothers for some six or seven years untill they develope the skill to survive on their own. Wild females orangutangive birth only every seven or eight years – the longest time periode of any animal. The animals are long-lived and have survived as long 50 to 60 years in captivity.

Because orangutan live only in two island in the worls (Borneo and Sumatra) and because they are so dependent upon trees, they are particularly susceptible to logging in these areas. Unfortunately, deforestation and other human activities, such as hunting and plantation have placed the orangutan in danger of extinction.