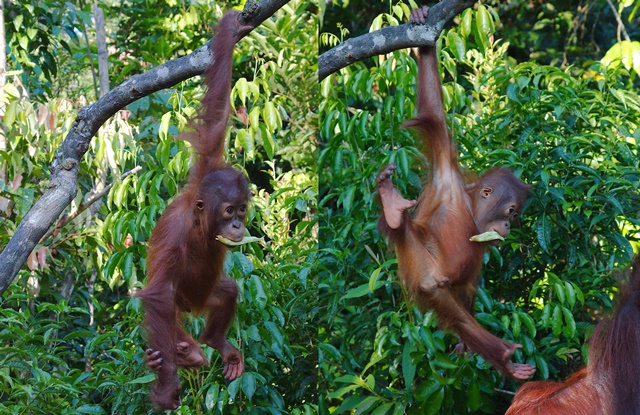 13 Orangutans In The Wild

After collecting our guests from Iskandar Airport in Pangkalan Bun we drove to Notch a 25 minute car ride where we were welcomed by the crew of the Klotok (the boat) that was going to be our home for the next 4 days. The weather had turned for the worse with strong winds and heavy rain making steering the Klotok against the river current a challenging job for the Captain.

Whilst taking in the scenery on both sides of the Sekonyer River our guests were served a delicious lunch followed by fresh fruit and plenty of cold drinks. This was our guests first trip on a Klotok and their first visit to Tanjung Puting National Park but they were already adapting to life on board.

The rain ceased and the sky gradually brightened to reveal the sun and after just over 1 hour we reached one of the existing Orangutan rehabilitation centres in the National Park, here we were lucky enough to see groups of long-tailed macaques grooming each other and mother’s breast- feeding their babies.A pair of black hornbills flew over the Klotok which according to the local Dayak community is a symbol of good luck.

Another 2 hours on and we arrived at the feeding station of Tanjung Harapan, bananas and milk (milk powder mixed with water) are placed onto the platform by one of the staff members and every now and again he would shout to the Orangutans to come down. Hearing sounds above in the trees is a clear sign that the Orangutans are on their way. An adult female with an infant just over 2 years old were the first to arrive followed a few minutes later by the others, 1 adult female with baby, 1 adult male, 2 adolescent females and 3 adult females all with infants. They all enjoyed tucking into the bananas and milk and some put as many bananas as possible into their mouths and moved to a safer area to enjoy in peace.

It was starting to get dark although still only 4-30pm mainly because we were under the forest roof, so we returned to the Klotok to resume our journey. From a distance we saw several groups of Proboscis monkeys or Dutch ape on the branches over hanging the river. Some were still moving from tree to tree but others were sitting back watching a chase that had developed. The Proboscis is one of 9 species of primate that exists only in Tanjung Puting National Park (endemic). As it was now dark we stopped at the side of the river and tethered the Klotok to a tree. The Klotok crew prepared the beds and mosquito nets while the guests listened to the sounds of the nocturnal animals while enjoying dinner by candlelight. After dinner everyone went to bed early tired from the first day’s activities.

After an enjoyable breakfast, we proceeded down the river to visit the Orangutan rehabilitation camp whilst observing other wildlife that exist on both sides of the river and rain forest vegetation in Tanjung Puting National Park. After approximately 1 and half hours we arrived at Pondok Tanggui and visited the camp to watch the Orangutans feeding for 9:00 am. Sounds officer Tarzan calls the rehabilitated Orangutans to come down from the trees, his call resonates all around the forest and this he does over and over again. After about 15 minutes an adult female and her baby start to make their way down, slowly moving from tree to tree the mother and baby are a great photo opportunity for our visitors. After an hour we headed back to the Klotok and proceeded back to Camp Leakey which is located in the headwaters. Meanwhile snacks and soft drinks are served on board and our visitors can enjoy the vegetation on both sides of the river.

The Captain slowed the Klotok down and stopped by the side of the river as Orangutans were spotted in the grey tree about 25 metres up on the right side of the Sekonyer River. The wild Orangutan looked a little scared and he hid behind the trees watching us, every now and again he would make a noise like the sound of a kiss (kiss quick) and he snapped the twigs in anger because we were there. A few minutes after another wild Orangutan was spotted grabbing a tree branch to eat the fruit. These were the first wild Orangutans that our guests had seen and another good opportunity to take photographs, soon the wild Orangutans had disappeared into the forest to get away from the noise of the Klotok and the human visitors, and we continued our journey to camp Leakey.

Reaching the river crossing the waters change colour from a murky brown to black. The river water on the right of the intersection shows the contamination by illegal mining (murky brown), the river water on the left of the intersection where the rehabilitation camp is and where the famous Camp Leakey is situated is tea-coloured because it is a peat swamp forest that contains a high acid content which indicates that the river is not contaminated. This part of the river is narrower and the Klotok Captain had to be extra careful because there are a lot of fallen trees on the river bed and he did not want to catch the bottom of the Klotok on the trees. On this part of the river we saw a variety of birds and animals including a Stork- billed Kingfisher, Blue-eared Kingfisher, Black and Red Broadbill, Asian Paradise Flycatcher, Black Hornbill, Rhinoceros Hornbill, Pied Fan-tail, Fresh water Crocodile Long-tailed Macaque, and three heads of wild Orangutans who were looking in the direction of Camp Leakey.
On our arrival into Camp Leakey we enjoyed lunch and a rest before going to the feeding platform at 2.00 pm which is almost 2 miles away on foot.

Leaving the Camp behind us we started on our walk to the feeding platform along a 200 metre long and 1 metre wide walkway. The bridge is made from Ironwood which is very hard and sturdy and endemic to the island of Borneo. The walkway was constructed in 2003/2004 by foreign volunteers funded by the Orangutan Foundation International where volunteers pay to stay for 1-2 months to work on different projects in and around Tanjung Puting National Park a great way to spend part of a Gap Year.

On arrival at the feeding station the visitors were very excited to see many Orangutans hanging from the trees some were running along the ground to get to the platform as fast as possible so they could tuck into the milk and fruits. There was a tense moment when an adult male approached the platform some of the Orangutans ran off but a couple stayed on the platform. This large male was Tom the dominant male at the camp; he weighs approximately 120kg (264lb or nearly 19 stone). His mother was called Tut one of Camp Leakey’s rehabilitated Orangutans. The staff were still placing food onto the platform but our guests had taken many photographs and so we made our way back to the Klotok where we continued on our journey to Camp Pondok Ambung and on arrival we had an Indonesian dinner again by candlelight. Afterwards we went to explore the forest at night accompanied by camp staff and field officers from the Tanjung Puting National Park Authority. The birds were all asleep and the camp staff made sounds similar to that of the nocturnal animals of the forest. We walked for almost an hour looking at the mushrooms that glowed in the dark, tarantulas, deer and porcupines. The trekking paths that we used were also used for research purposes. On our return to the Klotok the crew had prepared the guests beds and mosquito nets and this gave our guests an opportunity to check the images they had taken on their cameras. Two hours later it was dark and therefore time for sleep.

We were woken by the melodious sounds of the gibbons calling to each other in the forest, also the sounds of different bird species in the trees. The air was very fresh and the various species of plants and trees gave of a distinctive smell making Tanjung Puting a very beautiful place to be in the early morning. Breakfast served on board as we made our way down river to Pesalat a 2 hour trip as the Klotok slowly navigates the river it is another opportunity to take in the sights and sounds along the river bank. Arriving at Pesalat which is a reforestation site we walked along a 900 metre walkway (bridge) that connects the swamp forest and the lowland forest where you can see various species of ferns in the swamp forest and other plant species.

Arriving at the site we were greeted by a member of the field staff, a friend of the National Park Foundation. He informed us of the names of the many tree species that had been planted in the nursery and our guests helped plant seeds in a specially prepared area of Pesalat. This was a great experience for our guests as they could participate in the preservation of the rain forest at ground level and not just to enjoy the beauty, nature and wildlife alone. After lunch we visited the Sekonyer village which is around the edge of Tanjung Puting National Park, the villagers sell crafts including Orangutan sculptures, bracelets, rings and scarfs made from plants and t-shirts with various motifs including the Orangutan. The shop assistants are always very pleased when visitors buy their gifts as it helps their village.

Back on the Klotok continuing the journey down river taking in the wildlife at the forest edge and after another delicious dinner our guests sit back and relax on their last night, a spectacular show of thousands of twinkling fireflies a wonderful sight to see before going to sleep.

Last morning we were up early to enjoy a relaxing breakfast and coffee and to soak up the atmosphere whilst proceeding to Kumai where our guests are escorted to the airport to continue either to other destinations or home.