The Way Of Living 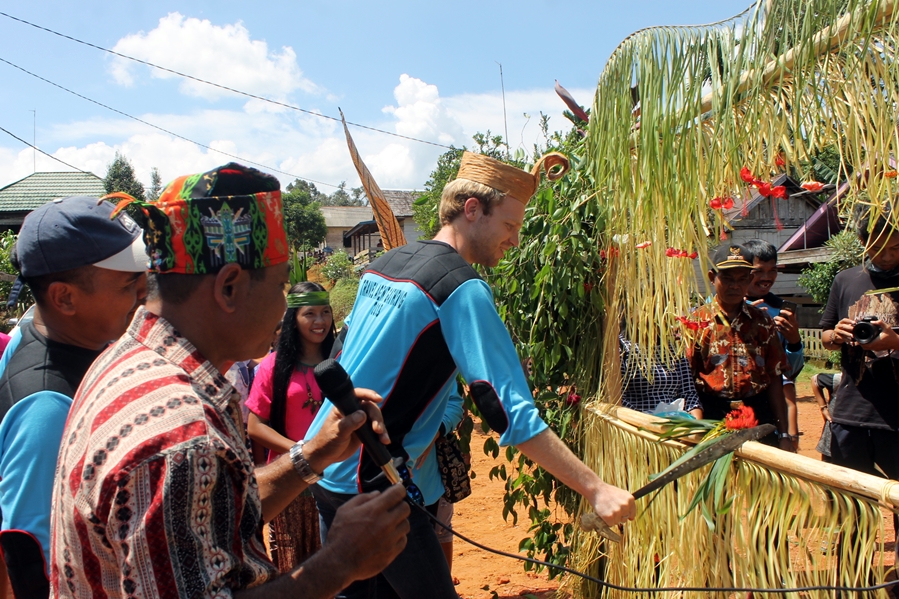 I felt really flattered that Ancis invited to join him on a travel gathering held by goverment tourism agency of Lamandau regency to an original and unspoiled dayak village in Lamandau, Lubuk Hiju. What i thought it would be a normal tourist trip, appeared to be ‘gathering’ of a large group of tour agents in the region of Kotawaringin Barat gathering was organised to research the potential of a dayak village to become a new tourist destination. I was the only real tourist….

We drove in a colonne from Kumai to Simpang Kete (road intersetion). We joined with other tour agents the region. There was a small meeting where we heard about the program and we all got a blue keepershirt so we seemed like a cohesive group. Then we drove for several hours through a giant industry plantation. First,wherever you looked, you saw palm oil trees. later wherever you looked, you saw trees for manufacturing paper. On the whole ride, i did not see any primary forest, except on the horizon. There, i saw the weird shaped mountains and i could imagine how fascinating the forest would look like. The road underway where from time to time really bad. There were bums and pits all over. Thanks to the skilled driver we managed to pass every obstacle.

During the ride i learned about the palm oil plantations. About the way of harvesting, the use of land and the opportunities of job for locals. Some were clearly pro palm oil plantation, some were againts and pointed to the conservation of the primary forest and animals who lsot their natural habitat. I found it’s really interesting to hear the diversity of viewpoints and opinions of the tour guides, because they are mainly depended on the nature, not the plantation. At least so far, i did not see any tour to a palm oil or industry forest plantation to experience the ‘nature’ to birdwatch or to see the majestic orangutan.

Finally we arrived in Lubuk Hiju Village! All villager gatherd in front of the meeting hall to welcome us. A group of young girls performed an opening dance. I was invited to stand in front of our whole group, next to the secretary of travel agents association and the head of tourism agency of Lamandau Region who organizer of this all, which was also my translator. One of the young girls gave me a some sort of a crown which was made of bark and made me the center of the welcome ceremony.Then i had to come forward and break a small gate open, drink tuak from a cow horn and walk under the gate to officialy open this ceremony just before i had to enter the community hall, my feet were cleaned with a leaf and i had to crack an egg open with my bare left foot. I enetered the community hall and sat down next to the head of village and my translator. Everyone who wanted to see the ceremony then follwed and sat down somewhere on the floor of the community hall. A couple speeches were held by some important people and then the ceremony continued. My translator and i had to sit on a gong(instrument) again, our feet were cleaned just as our hands. A red ribbon was put on us, we got a small bracelet which would protect us againts bad spirits and be a sign that we are family of the villagers now. Again we drunk a lot of Tuak. I was told that sometimes, the Tuak could be strong, sometimes sweet and sometimes bitter… I was prepared for anythingExcept for watching the traditional slow motion dayak dance and drink an awful lot of Tuak. I think, the main purpose of this whole event was to make me drunk so everybody was giving me Tuak. Out of respect i drank it all, and miraculously i felt pretty good. The ceremony ended with a lot of dancing. After that, i took some rest and took a swim in the river.

In the evening, all the participant of the tour gathered in the commuity hall again to discuss the touristic potention of the village. We agreed the welcome ceremony was nice but to make this village become tourist destination there would be much work to do in the oming years. And the big question of course: what makes this village special or different compared than other dayak villages?

The next morning we walked a 2 hours walk to a riverbed and a raoid in the river. The walk let us through cultivated forest and was very easy. Most guides enjoyed the rest and those who could swim, took a swim in the refreshing water. But not me, i was presented all traditions of the dayak people.

They show me and let me try a lot of tradition. I cooked in bamboo, i drank from bamboo. I fished in a traditional way along the riverbed with my hand and a bucket to catch the fish. I harvested rice paddi, coconut, casava and many more. The dayak people showed me their knowledge about the forest and their way of living. I had to try everything and of course had to pose countlesly to make the right picture or movie. I believe, they were very pleased to guided me, and i felt really privileged to follow and learn from then. Sometimes i felt myself an ashamed, cause my skills were nothing compared to theirs. Once in a while there was a good laugh about me or some anxious moments caue apparently it did not look very safe or skillfull what i was trying to do.
After the very interesting guide was over,we had lunch and finally i could take a swim myself in teh refereshing water.

I was really satisfied when we headed back in the early afternoon. I had a very interesting and great day. I found it very interesting to learn about the culture and traditions of the dayak tribe. Thank you for having me and the whole group of tour agents!